Thanks for your feedback! The survey results are in! - Rochelle Sanchez

Thanks for your feedback! The survey results are in!

You know that annoying part of having an online business, where…

A couple weeks ago I emailed a bunch of you and asked for your feedback, and promised to share with you the results of my feedback survey on why people DIDN'T buy. There were several reasons for that survey:

Contrary to some peoples' belief — this was not a cry for help or a call for attention or a marketing tactic. But hey, some people are suspicious by nature, so let's just let them be suspicious. That's what they want to be.

I'll be up front with you — I made a MISTAKE in my execution of this feedback survey. It wasn't perfect. But I still learned from it! Read on!

The questions I asked: 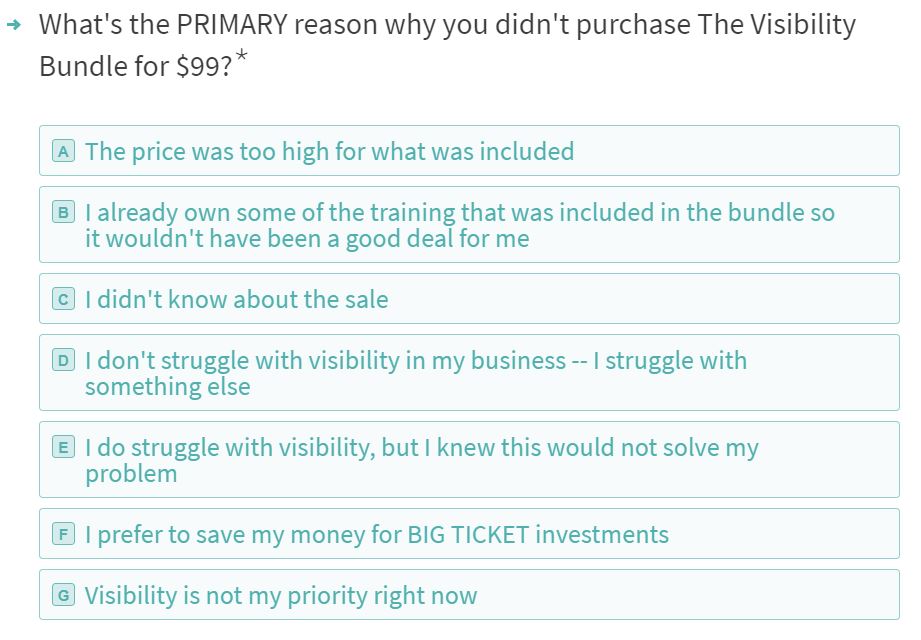 Why I asked it this way:

To give people a choice between the top reasons I thought, as an online marketer, people would not buy a good deal for a reasonable price. I was testing my knowledge against their gut response.

I call it a gut response because most people rush through surveys just to get to the end. We humans like to finish things. We feel accomplished. That isn't always helpful when you need someone's honest opinion.

Just think about how you take surveys — do you put your entire life in perspective and give a heart-and-soul answer when someone asks you about a random choice you made today?

Not really? Me neither.

Here were the results:

The response was surprising to me, considering I had JUST surveyed a lot of people before, and they said that their struggle was Visibility. That was the whole point of doing the flash sale — to respond to my audience's needs. It goes to show you that not everyone is ready to embrace an answer to the very problem they admit that they have.

And also — don't beat yourself up if you do your best to cater to your community's requests (not for the money but for their own growth, so they can become the changemakers and loving moms, teachers, and coaches they want to be) and they don't “buy it” — both figuratively and literally.

What OTHER reasons did you have, for not purchasing The Visibility Bundle for $99?

Same response choices as Question #1, but they were given the ability to choose multiple answers. My data is skewed a little in this case, because I didn't have any fancy algorithm thing to exclude each person's response to Question #1 from the choices. But we don't let technology hold us back, right?

Having an “Other” choice was eye opening. Letting people state in their own words why they couldn't commit right now is really revealing (and comforting too — I can't believe the words of comfort and encouragement I got!)

I won't give you all the negative nitty gritty (like how someone else listed ALL of the financial struggle he's having and then followed it up with how I'm using marketing tactics to get attention… what?).

But here's the gist: 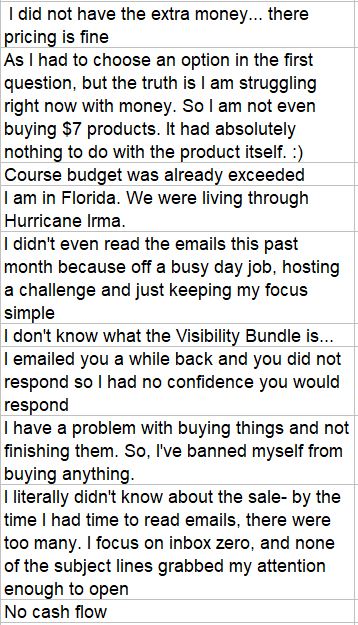 (Not all responses are shown, just these to show the range of answers you can get in an open ended question)

Here's the best part, though: a snippet of the really encouraging words I got in my last question, which asked, “Is there anything else you want Rochelle to know?” 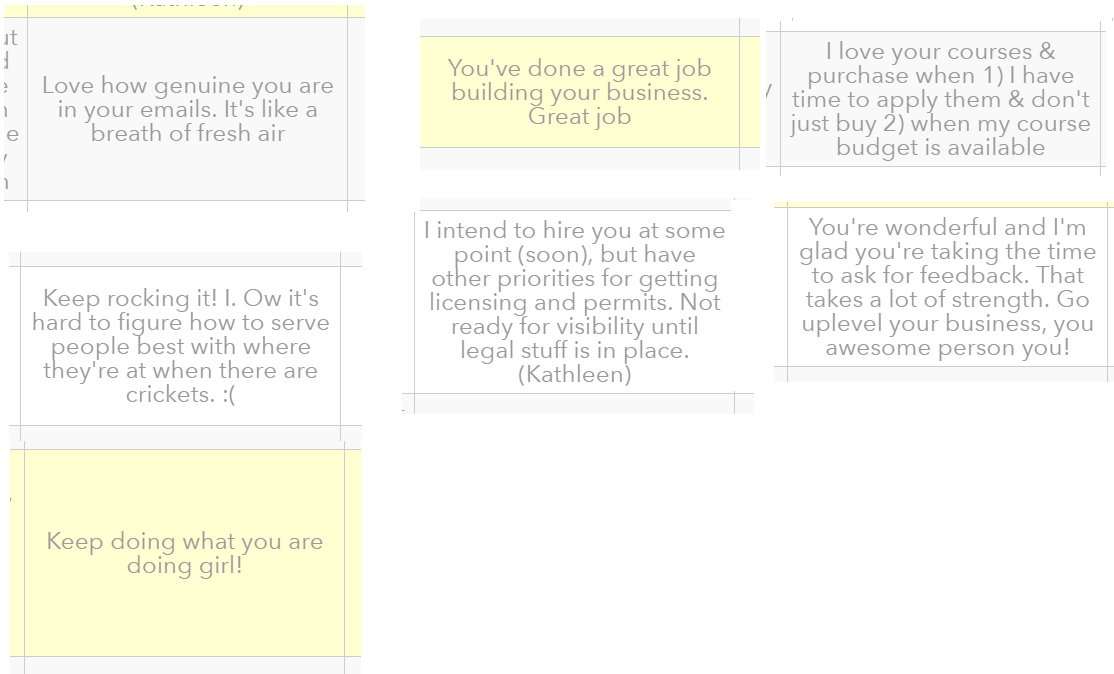 So… I have a request for you.

Take these positive, uplifting statements and keep them for yourself.

I get these kinds of comments all the time, but only because I stretch myself, get uncomfortable, and then accept the praise when it comes.

I guarantee you that someone believes in you and thinks the WORLD of you right now. They just haven't gotten the message through to you, yet. Someone out there appreciates a certain post, or a certain response, or a certain article you wrote about the very thing they were struggling with.

Focus on that person and what's going RIGHT.

Avoid negative nancies like the dog poop that irresponsible owners leave for the rest of us to step on. (Am I the only one who sees dog poop at the last minute and has to do some fancy foot work to time my steps so I don't smush right into it?)

Over analyzing doesn't help anybody, especially if you're doing it on your own, in your head, and not keeping track of the positive learning lesson you want to take away from the situation.

You may feel like you're on your own, that you're struggling, that you have things to figure out and all the people “with money” to spend on as many courses, courses, tools, and programs are in their own bracket — but they're not.

We're all human, behind our keyboards. We're real people, with real opinions and emotions and intuitive “pings,” and we're way more likely to make a difference if we put ourselves out there.

You are allowed to ask for as much money as you need, and more.

We believe in you.

Stretch yourself a little, get uncomfortable, and focus all your energy on being positive and seeing the light in any situation. That will make all the difference.

Call to Action: Have you ever asked for feedback in a survey after a launch? What surprised you the most about the results? Answer in the comments, below!

How to be Authentic on Social Media

Facebook Profile, Page, and Groups: How to Make The Most ($) of Them

Clarity and Validation: How to Recover from a Flopped Launch 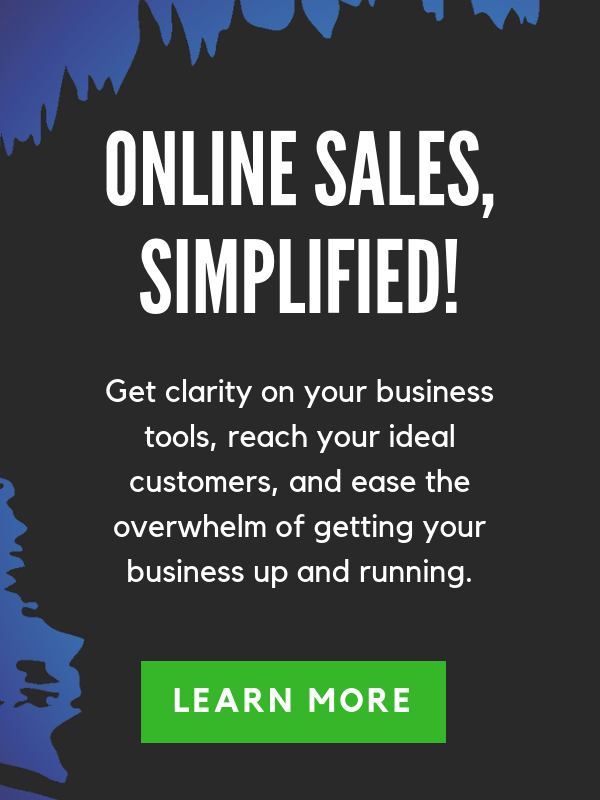