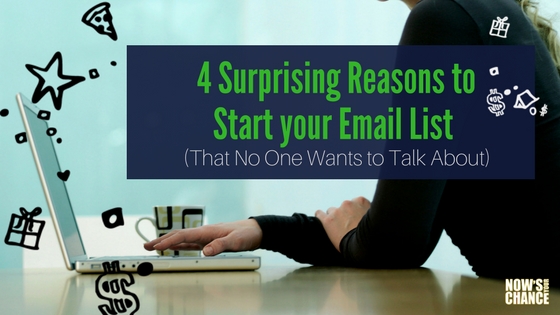 You’ve probably heard by now that you either need to:

It’s not all fluff, though. So maybe right now you secretly enjoy someone else’s group more than your own, right?

They go to your profile. Then to your Facebook Business page. And then from there, they either get distracted or they sign up for your very freebie and end up on your email list.

Ta da! New tribe member with YOU as an expert on their radar! (And if you set up your list right, they also automatically got an invite to your group!)

Your group may not feel like it’s poppin’ and the best thing ever, party and confetti 24/7. And that’s okay. An email list is simply another way for them to get to know you and learn from you.

People really DO write back. And if they don’t write back, they end up telling you on Facebook (yes, sometimes via your group) that they love your emails.

For example (these are real people who said these things to me, by the way): And ya know what else?

It’s easier to keep emails organized than visiting 5 Facebook groups, writing back to 18 private messages, and trying your very best to book a discovery call with SOMEONE.

Here’s how I keep my emails organized:

I open my email

If it’s a quickie response, I respond immediately.

If it’s a longer response, then I put a star on it. Later when I’m at my desk, I open the “Starred” folder and respond to each email.

That’s a heck of a lot faster than using Facebook and getting lost in all the cat videos and introvert comics on my news feed. It’s a lot more organized, too. 🙂

#3 People are getting kind of sick of groups…

There’s a group for EVERYTHING and EVERYONE these days. I’m not saying the power of Facebook groups is gone, but I AM saying that it’s a lot easier to respond to someone’s comment by saying “I have a freebie that I made on this exact thing! It’s right HERE.” than it is to convince them to join yet another “business clarity and confidence with empowerment” group that they’ll probably forget about next week.

Plus, there’s something to be said about someone who goes through the trouble of clicking, reading, entering their name and email address.

That takes more intent to follow you and keep tabs on you than someone who just hits the “Request to Join” button.

And in case that’s not clear…

Intent is GOOD. That means you’re triggering something in them and you already have their attention as a go-to expert. Good!

#4 People DO want to talk to you privately

By sending your community an email, you have the opportunity to invite them to engage in 1-on-1 conversation with you. Simply by hitting reply.

Sometimes when you’re running a group, you lose touch with what people need and what they’re struggling with, right now.

Or they feel like they don’t fit in because everyone in the group is talking about something ELSE (funny jokes, planners, shows they don’t watch, politics they’re trying to avoid) and they figure,

But hey, there’s a way around that!

Sending a simple email to your community that says “I know the group is crazy busy, but I still want you each to know that I’m here to support you. Reply to this email and let me know what you’re working on, and I can hold you accountable and even steer the direction of the group to be more inclusive.”

How comforting would it feel for YOU to receive that from a guru you admire?

That kind of email reassures the overlooked, outcast, sometimes bullied members of your tribe that they matter to you, even if their experience in your Facebook group hasn’t been stellar 100% amazing. You’re not here to curate the best group on the internet. You’re here to help and answer questions, and a simple email is a great way to invite people to raise their hand.

And since I know you’re wondering — Do it in Convertkit if you can afford $29 per month. Yes, there are a lot of good options out there, but Convertkit is my #1 choice because of how simple it is. If you can’t afford $29 per month then grab something cheaper, but know that it probably won’t work as well and take you three times as long to set up and troubleshoot. #justsayin

Your turn. I want to hear from you!